Nikolai Zhukov was a prominent Soviet graphic designer, who was awarded the title of People’s Artist of the USSR and numerous other distinctions. For thirty years, starting in 1943, he was head of the M.Grekov Studio of War Artists. He produced portraits of many distinguished individuals of the Soviet Union, including military officials, scientists, artists, theatre actors, and writers. During the Second World War he served as a soldier and war correspondent, creating life drawings and designing patriotic propaganda posters. In 1946 he was a witness at the Nuremberg Trials, leaving a unique and highly important historical account consisting of 250 drawings.

Zhukov was one of the chief artists working at the All-Union Chamber of Commerce in the 1930s when he produced a prominent series of posters entitled Visit the USSR. His many other works for Intourist depicted the people of the Soviet Union, its capitals and provinces. His other favourite subject was children: Zhukov created drawings and watercolours of children for postcards, book illustration, magazine covers and newspapers such as Murzilka and Pioneer. In addition, he was a writer and essayist and published a significant number of novels, short stories and travel diaries, as well as articles on art and culture. 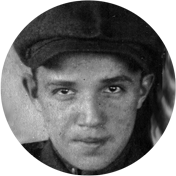