GRAD is proud to present ShadowMemory, an app which invites artists, designers, film-makers, researchers and architects to develop unique routes which encourage us to see conventional in a different way. Informed by their makers’ work, artistic practices, themes of their research or simply their areas of interest, the routes offer new ways of seeing the world around us. Conceived as a creative platform for engagement with the city by a Moscow-based artist and designer Katya Sivers, the app can simultaneously act as a multidisciplinary art exhibition, a tour, a game and an immersive art installation.

As part of the special programme of the Fourth Industrial Ural Biennial ShadowMemory will be premiered with two ground-breaking art routes by The Demolition Project, and Sergey Kasich and Victor Murzikov.

The app will become available for download from Apple Store and Google Play from 14 September 2017.
PRESS

by The Demolition Project 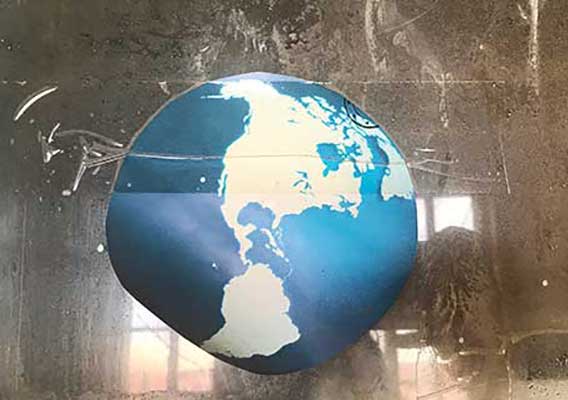 Blueprint explores Yekaterinburg’s hidden patterns, suggesting ways to read the city through clocks, codes, footsteps, light years, sound waves, particles and monuments. It begins just outside the Ural Instrument-Making Plant and ends a few meters from the starting point. This new commission for GRAD, asks: Do things exist if they can’t be measured? Are you really here if you can’t be found on Google Maps? And if everything is moving, where is here. The Demolition Project is a collaboration between Russian artist Alisa Oleva and English writer/performer Debbie Kent, who use the city as both material and studio. Walking is at the heart of The Demolition Project’s practice, alone or with others; the creative duo like setting tasks and using instructions to provoke ideas, start conversations and open up possibilities for the imagination. Their work aims to explore the cracks in reality and shift the way people see things, their sense of ownership or power; and invites the audience to play an active role. FB page

by Sergey Kasich and Victor Murzikov We invite you to enter into a story that possibly took place in Yekaterinburg more than ten years ago. With every step on your journey the narrative will unfold, delivered to you by the author, Victor M. The route begins on the pedestrian bridge across the railroad that leads to the Tagilskaya Street: the quietest and strangest street in Yekaterinburg. What is hidden in the silence of this street? What will the dust of the pavement whisper to you? Phantasmarium of Victor M. is an immersive project, inspired by the fantasy world of the famous Yekaterinburg horror film-maker Victor Murzikov and rooted in the places, streets and spaces of his native city. This evocative exploration is co-created by the Moscow-based multimedia artist and researcher Sergey Kasich. Sergey Kasich is a sound artist, musician, performer. Graduated as a Psychology major with MA (Hons) in 2006 from Lomonosov’s MSU, Kasich completed his postgraduate studies in behavioral genetics and psychodiagnostics in 2010. Kasich is the founder and curator of Moscow Sound Art Gallery and Moscow Sound Art Studio. Since 2011 he has led a course investigating the technical basics of interactive arts in Rodchenko’s Art School in Moscow. Kasich curates and produces critically acclaimed events and projects supported by residents of SA which include: an annual festival and monthly showcases. Since 2008 Kasich’s practice has focused on interactive and generative sound and multimedia art installations featuring: interactive sound and visual design; creative coding; development; engineering and consulting. Kasich also works as a composer and sound-producer across a broad spectrum of the performing arts from theatrical productions and performances to pop-music projects.

Viktor Murzikov is a film-director. Graduated from the Russian State Vocational Pedagogical University, Yekaterinburg, with a major in cinema and TV production. Grew up in an area surrounded by factories, railways, industrial wastelands and water reservoires. From childhood developed a liking to horror movies, which he watched mostly with his Mother, an experience that, he says ‘helped to stay sane during the very real horrors that passed in the last decade of the 20th century in Russia’. From 2004 started filming his own, micro-budget films with friends, family, and classmates. At the moment his filmography includes 10 films, among which Slug vs surgeon, Season of Decay, Eleventh route, Behind the wall, Last summer: city of zombies, Intestines inside out 3: Elmer's justice. Victor is currently working on Intestines inside out 4.