Tatiana Bruni was born on the 24th October, 1902, in St Petersburg. During her childhood she was surrounded by creativity. Her family included artists and professional musicians (her father taught the young Sergei Prokofiev to play the piano, and her grandfather was the painter Fedor Bruni), and as a child she was often taken to plays and ballets.

She was in her teens when the Revolution came, but finished her schooling and in 1920 enrolled in the prestigious Society for Promotion of the Arts. Although she graduated as a landscape-painter, theatre design had always been her major interest. Her first work was the design for Prokofiev’s ballet Transiency , staged in Petrograd Institute of Rhythm of Perfect Movements in 1923. At the same time she became engaged with the radical Young Ballet which had the involvement of legendary choreographer Georges Balanchine. The Young Ballet was wracked with difficulties; it was disbanded and reformed several times, but the artists, choreographers and dancers were united by a desire to bring modernity, and the wonders of the industrial world, to the ballet stage. During the 1920s Bruni mostly worked for small theatres and travelling companies, meaning that her costumes and set designs had to be cheap and easily portable. She was influenced by contemporary Soviet agit-theatre and its glorification of industry; in this tradition, her proletarian heroes were dressed in versions of ordinary work clothes, while the villains’ costumes were exaggerated and grotesque satires.

It wasn’t until 1930 that Bruni gained her first work in an established theatre, when she produced designs for a comedy entitled The Saint at the Leningrad Bolshoi Drama Theatre. Bruni began work on The Bolt soon afterwards, making it another of her earliest major commissions. Her stage designs show the influence of constructivist theatre and Soviet poster design on her aesthetics. Bruni’s sketches for the ballet were included in numerous exhibitions, such as Paris-Moscow at the Centre Pompidou in Paris (1979), and Polyphony: From Malevich to Bruni at the Padiglione d'Arte Contemporanea in Milan (1998) and brought Bruni world-wide fame.

In 1937 she was commissioned to produce designs for Vain Precaution, a performance that marked the beginning of her work for The Maly Opera Theatre in St Petersburg. In the course of this forty year collaboration she played an important role in the production of many performances, which are now considered to be the most striking examples of Russian ballet. The beginning of the WWII was a turning point in Bruni’s life, as it was in a life of every Russian citizen. She spent the first year in Leningrad and was then evacuated to Perm, where she designed operas and ballets such as Swan Lake, Don Quixote, Giselle, Sleeping Beauty, and began to work for the Kirov Theatre (today known as the Mariinsky Theatre) and School of Choreography.

Apart from the ballet Bruni was actively involved in opera and drama theatre. During her life she created designs for more than two hundred performances in Moscow, Saint Petersburg, Kiev, Yaroslavl, Sverdlovsk, Perm and Saratov. She also taught at the Leningrad Institute of Theatre, Music and Cinema. Her students went on to work in numerous theatres, both in Russia and abroad. 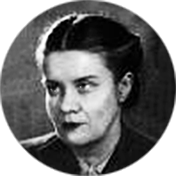