The Stenbergs’ father was a painter who came to Russia from Sweden in 1896. He encouraged his children’s interest in the arts from a young age, and both Georgii and Vladimir entered the Stroganov School of Arts where they studied decorative arts from 1912 to 1917. Already at this early stage they liked to be different from other students: they would choose unusual angles when drawing a model, or experiment with lighting to challenge themselves. While studying they also worked in the theatre and helped to organise exhibitions. In 1918 the Stroganov School was reorganised into the SVOMAS and the Stenbergs were gradually won over by the ideas of the Futurist poets Vladimir Mayakovsky, Vasilyii Kamenskii and Velimir Khlebnikov who often visited SVOMAS and spoke to the students. The Stenbergs, together with their friend Konstantin Medunetskii (with whom they collaborated until 1924), wrote a manifesto in which they renounced French art and proclaimed ‘Enough manufacturing!’, by which they meant copying the masters. During the Civil War the brothers, who were now called ‘Red Artists’, were producing stencils for propaganda posters for the front and for the liquidation of illiteracy.

The Stenberg brothers developed their emblematic style during the laboratory period of Constructivism in 1918-1922 when they worked alongside Aleksandr Rodchenko, BorisKarl Ioganson, Varvara Stepanova and other members of the Working Group of Constructivists. From 1921 they participated in debates on the development of contemporary art at INKhUK. Their experiments included spatial apparatuses, colour constructions and bas-reliefs exploring texture and surface. During this period they organised a lot of exhibitions showcasing their latest inventions, accompanied by provocative proclamations. They also showed their work at the OBMOKhU exhibitions from 1919 until 1923, when the association ceased to exist.

Around this time the brothers took up theatre design. They worked with Tairov from 1922 to 1931 devising stage decorations and costume designs for Kamerny Theatre productions. In 1923 they met Picasso and organised a one-day exhibition of their work during their trip to Paris together with Tairov and the whole Kamerny Theatre. Starting from 1928 Stenberg Brothers were the chief decorators of the Red Square: they transformed the Square several times a year for various occasions such as the October and May Day celebrations.

The Stenberg Brothers produced a large body of work in a multiplicity of media: they worked as Constructivist sculptors, theatrical designers, architects, and draftsmen; they completed design commissions that ranged from railway cars to women’s shoes. Their most significant accomplishment, however, was in the field of graphic design, specifically the advertising posters they created for the newly burgeoning cinema in Soviet Russia. The brothers designed their first film poster in 1923, which they signed with an abbreviated version of their surname, ‘Sten’, as they did not know whether they would make a second. They did, creating around 300 film posters together, many of which rank among the best in this genre. They signed all their future works ‘2 Stenberg 2’. Their intimate knowledge of contemporary film theory, Suprematist painting, Constructivism, and avant-garde theatre, as well as their skill in the graphic arts, was essential to the genesis of these works. Their innovative designs combined vibrant colours, geometrical lines, distorted proportions and perspective, and stark typography. They introduced and successfully exploited the medium of photomontage in order to translate the dynamism of the moving image onto a two-dimensional plane. They also developed an optical device that could divide a film frame into squares and project enlargements onto their studio wall.

After his brother’s untimely death in a road accident in 1933, Vladimir continued his artistic activity until 1963 when he started to lose his sight. 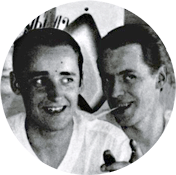