Dziga Vertov (the pseudonym of Denis Arkadievich Kaufman) was born in Belostok. Internationally renowned as one of the founders of documentary film, his kino-glaz [film-eye] theory — that the camera is an instrument, much like the human eye, best used for exploring real life — had a great impact on the development of cinema realism during the 1920s and beyond.

As a child, he studied piano and violin, and at ten began to write poetry. In 1916 Vertov enrolled in Petrograd Psychoneurological Institute, and later studied at the Moscow University. In 1918 Mikhail Koltstov, who headed the Moscow Film Committee’s newsreel section, hired Vertov as his assistant. Among Vertov’s colleagues was Lev Kuleshov, who was conducting his now legendary experiments in montage, as well as Eduard Tisse, Eisenstein’s future cameraman. Vertov began to edit documentary footage and was soon was appointed editor of Kino Nedelia, the first Soviet weekly newsreel. His first film as a director was The Anniversary of the Revolution (1919), followed by Battle of Tsaritsyn (1920) and History of Civil War (1922).

In 1919 he founded the group Kinoki, which subsequently issued a series of manifestos against theatricalism in films and in support of Vertov’s film-eye theory. In 1922 the group, led by Vertov, initiated a weekly newsreel called Kino Pravda [Film Truth], which creatively integrated newly filmed factual material and older news footage, applying the principles of montage to documentaries for the first time.

The subject matter of Vertov’s later feature films is life itself; form and technique are preeminent. Vertov experimented with slow motion, camera angles, enlarged close-ups, and crosscutting for comparisons; he attached the camera to locomotives, motorcycles, and other moving objects; and he held shots on the screen for varying lengths of time, a technique that contributes to the rhythmic flow of his films. He published a number of articles and manifestos explaining the theoretical foundations of his Kino-Eye method, including ‘We: Variant of a Manifesto’ (1922), ‘Kinoki: A Revolution’ (1923), ‘Kino-Eye’ (1926), ‘From Kino-Eye to Radio-Eye’ (1929) and ‘Man With A Movie Camera (A Visual Symphony)’. Vertov’s work received the close attention and support of the European avant-garde. At home, however, he was attracting unfavourable comment and attention from party officials, who considered Vertov an eccentric, and did not appreciate his artistic experiments. However, after the international success of Kino-Eye — Life Caught Unawares (1924), which was awarded a silver medal and honorary diploma at the World Exhibit in Paris, Vertov received two commissions at home: in Forward, Soviet! (1926), he used montage techniques to help create an image of Moscow recovering after destruction and famine; in One-Sixth of the World (1926), he presented a poetic vision of the Soviet Union. Soviet authorities refused to support Vertov’s greatest and still most rewardingly complex film, Man with a Movie Camera (1929), and he therefore had to accept the invitation of the VUFKU film studio in the Ukraine.

Vertov was prepared for the sound revolution more than many other film directors because of his early experiments with noise recording. With the arrival of sound, he made his first talking movie Enthusiasm, Donbass Symphony (1930), which was an instant success abroad, with Charlie Chaplin calling it the best film of the year. His next success, both at home and abroad, was Three Songs of Lenin (1934), made in commemoration of the tenth anniversary of Lenin’s death. By the end of the 1930s Vertov was deprived of any serious independent work. He was not specifically persecuted, but was confined to the production of standard newsreels, in stark contrast with his early bold and poetic experiments.

Vertov died in Moscow in 1954. In the 1960s his work and theories became essential for the rediscovery of cinema vérité, or documentary realism. Until today Vertov continues to influence the work of many filmmakers and contemporary artists, from Jean-Luc Godard to Richard Serra to William Kentridge. 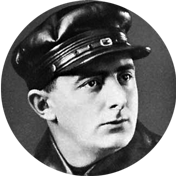