Kazimir Malevich was born in 1879 to a Polish family in Kiev and grew up as one of six children. During his younger years in the Ukraine he developed his love for art and, in 1904, having saved up money from working as a railroad clerk, he travelled to Moscow to study at the Fedor Rerberg School where he experimented with Art nouveau, Symbolist and Impressionist styles.

In 1907, after making an acquaintance with avant-garde artists Mikhail Larionov, Wassily Kandinsky and David Burliuk, Malevich’s style shifted towards a more Futurist aesthetic and he was invited to join the Jack of Diamonds group in 1910. He was also involved with another artistic collective – Donkey’s Tail and Target – which had a more Primitivist, Cubo-Futurist interpretation of art and philosophy. However, after disagreements with Larionov, Malevich left the Jack of Diamonds in order to join the Youth Union of Futurist artists in St Petersburg.

The period 1912-1913 saw Malevich work mostly in the Cubo-Futurist style; unlike his Italian counterparts, who celebrated the speed and violence of the machine age, he drew inspiration from rural scenes and Russian peasant culture. In 1913 Malevich contributed designs for the Futurist opera Victory over the Sun which incorporated for the first time an apparent version of the ‘black square’ motif. It wasn’t until 1915 that Malevich unveiled the Suprematist movement and his most famous work Black Quadrilateral (commonly known as The Black Square) at ‘The Last Futurist Exhibition of Painting, 0.10’ in Petrograd. Positioned in the space usually reserved for icons, Malevich’s quadrilateral became a powerful symbol of the new movement. To accompany the exhibition Malevich published a manifesto From Cubism to Suprematism: The New Painterly Realism, stating his desire to install a new style of painting that rejected realism and the conventions of the past.

Like many of his contemporaries, the October Revolution of 1917 offered new opportunities for Malevich. He began work at the People's Commissariat for Enlightenment as an employee of its Fine Arts Department, known as IZO, which examined and monitored art and education under the new Soviet state. He also taught at the Free Art Studios in Moscow where he encouraged students to forget the traditional bourgeois ideas about art and its rigidly taught forms and instead encouraged them to evolve in a more free and abstract direction. At this time he also helped design a production of Vladimir Mayakovsky’s Mystery Bouffe, marking the one year anniversary of the Communist Revolution.

1919 saw the completion of Malevich’s book On New Systems in Art in which he attempted to apply the ideas behind Suprematist art to the workings of the Soviet state, suggesting the notion of art in support of the system. Later that year Malevich moved to the town of Vitebsk to teach at an art school run by Marc Chagall. After Chagall’s departure in 1920 Malevich organised the students into a group called UNOVIS which roughly translates as ‘Affirmers of the New Art’. Their purpose was to reject traditional art forms and methods which they saw as constricting and undertake instead projects to design posters, textile patterns and china, seeking to move art into everyday life. Malevich went on to extend his Suprematist ideas into new modes and produced a series of architectural designs for towns and buildings. These models, christened ‘architektons’ by Malevich, formed utopian architectural plans for structures intended to orbit the Earth like satellites.

It was at this time that he, much like his contemporaries, was becoming too outspoken and non- conformist for the changing political and cultural scene of the time. In the 1930s Malevich’s work lost popularity and he was soon arrested and questioned on his political and artistic beliefs by the state police.

In his later work Malevich often portrayed rural and peasant scenes, much like the art of his early youth. His figures in these later paintings are often faceless and possess an eery quality. Towards the end of his career he was barred from state schools and exhibition venues and under pressure from the state Malevich returned to a more realistic style of painting. Nevertheless he didn’t completely abandon his old ideas - he continued to mark many of his paintings with a small black square in place of a signature. He died in 1935 after battling cancer and was buried in a coffin he himself designed, with the image of a Black Square on its lid. 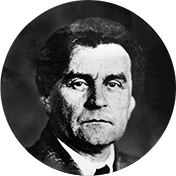