Ivan Perestiani (Giannis Nikolas Perestianis) was a Soviet film director, scriptwriter, and actor of ethnic Greek decent born in Taganrog. Perestiani became a stage actor as early as 1886, making his stage debut at the Taganrog Theatre under the name of Ivan Nevedomov. His first foray into film came in 1916 with a role in Coachman, Don’t Flog the Horses, directed by Evgenii Bauer. Many other roles followed, and soon Perestiani became one of the best-known actors in the Khanzhonkov studio. His success on screen led Perestiani to explore new roles behind the camera, resulting in a stint of script writing and directing with commercial studios in the Crimea, Sochi and Moscow. During the Civil War Perestiani wrote scenarios for several films, the most notable of which was The Revolutionary (1917) which marked a further collaboration with director Evgenii Bauer.

In 1920 he moved to Tbilisi, Georgia and became one of the founding fathers of Soviet Georgian cinematography. A year later he produced Arsen Dzhordzhiashvili (The Murder of General Griaznov) where he appeared in the supporting role of Vorontsov-Dashkov. The film achieved critical success both in Georgia and across the Soviet Union.

Perestiani’s most famous work was the adventure series Little Red Devils (1923), based on a novel by P. A. Bliakhin. In Little Red Devils Perestiani skillfully interwove violence and zealous support for the Reds with moments of lightheartedness and humour. The series was labeled the founding point of the adventure genre in Soviet cinema and enjoyed considerable popularity both amongst critics and the public: in a 1925 survey fifty percent named Little Red Devils their favourite film.

Perestiani’s career continued its upward trajectory and during the NEP years he established himself as the most prolific popular film director. His works from this period included The Surami Fortress (1923) and Three Lives (1925). In 1928 he became a director at the Odessa Cinema Studio VUFKU, and a year later received an invitation from Armenfilm studio, where he worked until 1932, directing films such as Zamallu (1930), and Anush (1931).

He devoted the latter years of his life to acting and lecturing, and appeared in a number of Georgian films including Arsen (1937), Georgii Saakadze (1942), and David-Bek (1943). In recognition of his achievements Perestiani was awarded several orders and medals, and in the 1949 he became the recipient of the honorary title of People’s Artist of the Georgian SSR. He died in Moscow on May 14, 1959. 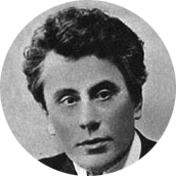