Velimir (Viktor) Khlebnikov was born on the 28 October 1885 in Kalmykia in the Lower Volga. He came from a mixed background with his father being supervisor of the local authorities and his mother a descendant of Russian nobility. From an early age he developed an interest in mathematics and felt an affinity with numbers. He studied mathematics at Kazan University from 1903, however was arrested for taking part in a protest and forced to leave the establishment. Nevertheless he re-applied and was accepted back into the university in the following years to study biology.

Despite his scientific background Khlebnikov left university in 1908 and moved to St Petersburg where he became part of the poetry scene. It was here that he became acquainted with Symbolist poets Vjacheslav Ivanov and Mikhail Kuzmin who became his mentors. This prompted the young Khlebnikov to adopt a pseudonym and instead of ‘Viktor’ he preferred to be known by the more South-Slavonic ‘Velimir’.

However, the ideology of the Symbolists did not inspire Khlebnikov and he began to think about revolutions and changes in art and life in a more general sense. It was here that he found companionship with younger poets and artists such as Vasily Kamensky, the Burliuk brothers, Elena Guro and Mikhail Matyushin, who developed their ideas into what would be known as Futurism. With the additions of Aleksei Kruchenykh and Vladimir Mayakovsky the group published ‘A Trap for Judges’ in 1910, a collection of their writings, and following this the famous manifesto ‘A Slap in the Face of Public Taste’ in 1912. The group took part in controversial and shocking behaviour which was reflected in their poetry through the use of new subjects and coinages and a renovation of the poetic technique. Khlebnikov himself was especially interested in the archaic world and the relationship between nature and civilisation, topics very relevant to the changing state of Russia in the early 20th century.

Whilst Khlebnikov felt an idealistic affinity with the 1917 Revolution and saw it as the realisation of worldwide freedom it was this and the First World War that reduced the Futurist’s numbers and finally curtailed the movement, with several of its members being conscripted into the army.

Following the Revolution Khlebnikov travelled throughout Russia, exploring what the nation had to offer. The poet only went abroad once, travelling with the Red Army to Persia in 1921 to assist the Gilan Republic. This trip affected the young man considerably and it is reflected in his poetry, ‘Goul-Mullah’s Trumpet’.

In early 1922 Khlebnikov journeyed to Moscow with the hope of successfully publishing his poetic works, however this was more difficult than the poet imagined and his lack of success and homesickness affected his health. He left Moscow for Santlovo, a village near Novgorod with artist Peter Miturich in the spring and died there on 28 June 1922. 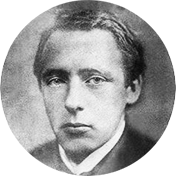