Vladimir Mayakovsky was born in a Baghdady village in Georgia on 19 July 1893. Following the sudden death of his father in 1906, Mayakovsky moved to Moscow with his mother and sisters. It was in Moscow that he discovered the literary writings of Karl Marx and he and a number of young revolutionary contemporaries joined the Bolshevik party in 1908. His revolutionary and dynamic attitude resulted in his arrest several times over the next decade and he spent a total of eleven months in prison. It was whilst incarcerated in Butyrka prison in 1909 that he began writing poetry.

Upon his release from prison Mayakovsky, by now a student of the Moscow Art School along with David Burliuk, became involved with a group of Cubo-Futurists. In 1912 the Futurist manifesto A Slap in the Face of Public Taste was published with Mayakovsky as its principle poet. Shortly afterwards he moved to St Petersburg, where he became acquainted with the writer and political activist Maxim Gorky, who was to become a huge influence on his work and later secured the performance of his first play Vladimir Mayakovsky: A Tragedy (1913). During this time he met and consequently became infatuated with Lilya Brik, who was to be his muse, lover and companion. Her husband Osip Brik became his editor.

At the outbreak of the First World War Mayakovsky made an attempt to join the army but was rejected and instead found employment at Petrograd Military Automobile School as a draftsman. At this time he wrote his critically acclaimed poems A Cloud in Trousers (1915) and The Backbone Flute, focusing on the themes of war and his affair with Lilya.

Mayakovsky felt an affinity with the ideas of the 1917 Revolution and the fervour of the time inspired him to write poems such as Ode to Revolution (1918) and Left March (1919). His enthusiasm for the Revolution manifested itself in many more of his creative projects including Mystery Bouffe (1924), a play about a huge flood that engulfs Russia and the subsequent rise of the ‘unclean’, by which he meant the proletariat. 1919 marked Mayakovsky’s return to Moscow to reside with his friend and lover Lilya Brik. At this time he undertook several professional endeavours including poster and cartoon designs for The Russian Telegraph Agency (ROSTA), as well as a proliferation of independent propaganda poetry and children’s books, all in support of the Communist party. In 1924 he even wrote a 3,000 line elegy upon the death of Lenin. He later took to travelling the world, visiting the USA, Mexico, Cuba and Europe, and recorded his findings in book of poems and sketches entitled My Discovery of America (1926). By the late 1920’s Mayakovsky had become a popular and renowned figure due to his prolific writing, artistry and political opinions. However his non-conformist attitude and public expression of these opinions put him at odds with the Soviet State. By the late twenties he was placed under almost constant surveillance by the state police. Mayakovsky did however gain acclaim in intellectual circles for being unafraid to break tradition and boundaries with his poetry and prose and for inspiring new trends in the arts. He was known for his passion, both in terms of his outlandish public proclamations and his turbulent relationships with women.

On 14 April 1930 Mayakovsky was found dead in his flat with a suicide note next to his body. Controversy surrounds the circumstances of the poet’s death; he is said to have committed suicide by shooting himself in the heart after a turbulent break-up with actress Veronika Polonskaya. The chief investigator into his death was himself killed ten days later.

Upon his death Lilya and Osip Brik inherited all his writings. Years later Lilya wrote to Stalin suggesting the state should endorse and publish Mayakovsky’s work. Due to her actions his poetry was printed by the state and included in the school curriculum. Mayakovsky is buried in Novodevichy Cemetery in Moscow. 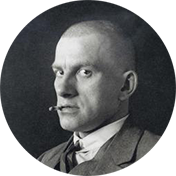