Aleksei Kruchenykh was born on 21 February 1886 into a Ukrainian peasant family. In 1906 he graduated from Odessa Art School and in 1907 moved to Moscow. From 1912 onwards he became an integral part of the group of young creatives known as the Futurists. Known mostly for his poetry and writings, Kruchenykh, along with Velimir Khlebnikov, published books written with deliberate misprints, strange hand-written typefaces on wallpaper and blotting paper. Famously Kruchenykh developed the transrational ‘zaum’ style of writing, in which new words were formed from the roots of Slavic words, with the purpose of freeing them from their meaning. Zaum , meaning ‘beyond sense’, reinstated the connection between word and object, creating a language, both old and new. The illustrations that accompanied these writings were primitive in style and echoed the coarse and discordant tone of the accompanying poems. Among these books were A Game in Hell (1912), The World Backwards (1912) and A Duck’s Nest…of Bad Words (1913). In addition Kruchenykh worked with Kazimir Malevich and Mikhail Matyushin on the Futurist opera Victory Over the Sun (1913), which proclaimed the victory of artificial light over the sun and technology’s dominance over nature.

In 1912 Kruchenykh married Futurist artist and illustrator Olga Rozanova with whom he collaborated on several publications, one of which was the notable Universal War in which her abstract collages compliment the nature of the poet’s writing style. The First World War saw Kruchenykh relocate to Georgia where he founded the Futurist group 41 Degrees. Later in the 1920s the writer returned to Moscow and immersed himself in the activities of LEF, a leftist group of avant-garde artists determined to re-examine the ideology and purpose of Art.

The 1930s saw a changed political and artistic situation in Russia. This led to decreased popularity and the eventual cease in the publishing of Kruchenykh’s works. It was from this point onwards that Kruchenykh devoted himself to the study and classification of Futurist art.

By the mid 1950s Kruchenykh had become associated with underground artists of the Lianozovo school, yet again pushing political and artistic boundaries. Kruchenykh died in Moscow in 1968. 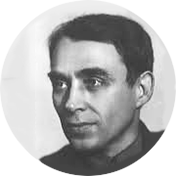