Gustavs Klucis [also known as Gustav Klutsis, the Russian spelling of his name] was one of the pioneers of Soviet agitprop graphic design, particularly prominent for his revolutionary use of the medium of photomontage to create political posters, book designs, newspaper and magazine illustrations. He was born in the small village of Ruen in Latvia. He studied art in Riga from 1913 to 1915, and later in Petrograd from 1915 to 1917. He then continued his education at SVOMAS-VKhUTEMAS in Moscow. It was there that he met Valentina Kulagina, his future wife and a prominent poster and book designer herself.

As a student, Klucis worked with Tatlin, Malevich, Lissitzky, and other representatives of the new artistic order in the new state. In his early works he was particularly preoccupied with the problems of representation of three-dimensional space and spatial construction. In 1919 he created his first photocollage Dynamic City, where photography was used as an element of construction and illustration. In 1920 Klucis joined the Communist party; his works around this time sought to transform the logic of political thought and propaganda into Suprematist form, often using documentary images of Lenin and Stalin in his radical poster designs.

After graduating from VKhUTEMAS, Klucis started teaching and working in a variety of experimental media. He became an active member of INKhUK and a militant champion of Constructivism. Klucis advocated the rejection of painting and was actively involved in making production art (‘proizvodstvennoe iskusstvo’), such as multimedia agitprop kiosks to be installed on the streets of Moscow, integrating radio-orators, film screens, and newsprint displays. Two such structures were constructed for the Fourth Congress of the Comintern in November 1922 and subsequently enjoyed great popularity as their plans were published and models exhibited. Through these constructions Klucis developed his own individual method of combining slogans and functional structures built around simple geometrical figures — this method would later lie at the core of his works on paper as well.

Klucis’s first photomontage designs for books and magazine covers were published in 1923, around the same time that Rodchenko was experimenting with the medium in the magazine LEF and the publication of Mayakovsky’s poem Pro Eto. Klucis recognised that the ‘fixed reality’ of photography offered endless possibilities for a new form of propaganda art that was accessible and effective. He acquired his own camera in 1924 which enabled him to incorporate his own photographs in the collages. Thanks to Klucis, Rodchenko and Sergei Senkin, by late 1924, the use of photomontage in publication of books and illustrations had been consolidated.

After Lenin’s death in 1924 his image dominated Klucis’s propaganda designs, up until 1931 when it was replaced by the image of Stalin. Klucis’s photo-slogan works comprising the image of Lenin published in the magazines Molodaia Gvardiia and Smena in 1925 confirmed his reputation as a leading exponent of political photomontage. It was in 1926 that Klucis started to work specifically on political posters promoting socialist reconstruction, in accordance with the ideological discourse of the Party at that time. In 1927 the All-Union Printing Exhibition initiated by El Lissitzky took place, which represented Soviet poster art in all its manifestations. Klucis not only exhibited a large number of works, but also played an active role in organising the exhibition. Klucis’s work was also included in the 1928 International Press Exhibition in Cologne, where the main exhibit was El Lissitzky’s photomontage.

In 1928 Klucis joined Oktyabr — an association that united leftist artists, whose aim was ‘to promote the class-proletarian tendencies in the sphere of three-dimensional art’. The shared conceptual approach and variety of creative interests of Oktyabr members was an important factor in Klucis’s artistic development. Starting from 1929 Klucis worked on the Struggle for a Five-Year Plan series of photomontages and posters that would become classics of Soviet design just like his earlier Lenin series. His works of this period often combine methods of posed photography, reportage and double-exposure images.

Starting from 1930 Klucis lectured at the Moscow Printing Institute, and became a vice-chairman of ORRP, a group that united poster artists. By 1931 he was concentrating almost entirely on poster design, however the political climate was gradually changing and soon all posters were subject to Party censorship. Portraits of Stalin began to dominate the propaganda imagery. Klucis’s new posters began including huge portraits in the photomontages: photographs of marchers, shock workers, and, most commonly, Stalin. Klucis also worked on photomontages for front pages of Pravda newspaper and photo-panels for celebrations. Stylistically these works signalled a move away from Constructivism towards a monumental propaganda approach in glorification of Stalin. The spread of the Stakhanovite movement (dedicated to increasing labour productivity) from 1935 provided Klucis with yet another subject for his work. Around 1936 Klucis realised the limited decorative potential of photomontage compared to the new Soviet monumental art, and started to work in paint.

In 1933 Klucis exhibited twice at the State Tretyakov Gallery: in a major visual arts exhibition entitled Fifteen Years of Artists of RSFSR, which he also helped to organise, and the poster exhibition Against the Imperialist War. By the mid 1930s Klucis was one of the leading exponents of propaganda art, however his relationship with the authorities was gradually deteriorating, particularly with IZOGIZ, the Soviet publisher of mass propaganda. The last major exhibition he participated in and helped to organise was the Soviet Pavilion at the 1937 Paris World Exhibition.

On 17 January 1938, Klucis was secretly arrested and he was shot soon after. His wife worked for decades to earn his rehabilitation, a goal she finally achieved in 1956. It was not until 1989 that the records of Klucis’s assassination were revealed. 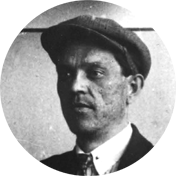