Boris Barnet was born in Moscow in 1902 to a family that owned a medium-scale typographical enterprise. His grandfather was an English printer who had immigrated to Russia in the mid-nineteenth century. Barnet studied as an architect and painter and after the revolution he worked as a set designer at the prestigious Moscow Art Theatre. In 1920 he enlisted in the Red Army where he served as a medic. After contracting an illness, Barnet returned from the front and entered the Military School where he learned boxing. His boxing career lasted until he was spotted by Lev Kuleshov, who convinced Barnet to join his collective as an actor and cast him in a prominent role in one of the first great Soviet comedies, The Extraordinary Adventures of Mr. West in the Land of the Bolsheviks. Barnet studied at Kuleshov’s workshop and soon started working as a scriptwriter and then director. In 1926 he collaborated with Fedor Otsep to produce a serial adventure comedy Miss Mend (1926). Over the next four decades he would gain a repu- tation as one of the great Soviet directors, though today his achievements have been largely forgotten.

Barnet went on to work at Mezhrabpom studio, where he collaborated with Iakov Protazanov whose work he greatly admired. His first solo effort was a comedy: The Girl With the Hat Box (1927) starred Anna Sten and became a popular success upon its re- lease. His 1928 satirical comedy The House on Trubnaya was recently re-discovered and now ranks as one of the Russian silent film classics. The film demonstrated Barnet’s ability to employ a range of avant-garde tricks whilst retaining popular appeal.

Barnet continued making films in the sound era producing such movies as tragicomedy The Outskirts (1933), and By the Bluest of Seas (1936). Barnet’s favourite genres throughout his career were lyrical comedy and adventure films, whereas the propagandist films he attempted were less successful. His 1927 work Moscow in October was to appear alongside Eisenstein’s October and Pudovkin’s The End of Saint Petersburg, however the film was withdrawn due to its clear weaknesses compared to the other two. Unable to make propaganda films, Barnet didn’t fit comfortably within any prescribed form of socialist realism, and his reputation for making Western-style movies eventually turned the party officials against him. His post-war films were not well received by critics, and his popularity gradually declined. In 1965 he unexpectedly committed suicide at the age of 62, in Riga, leaving behind a note that said he seemed to have lost the ability to make good films. 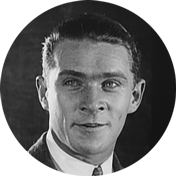