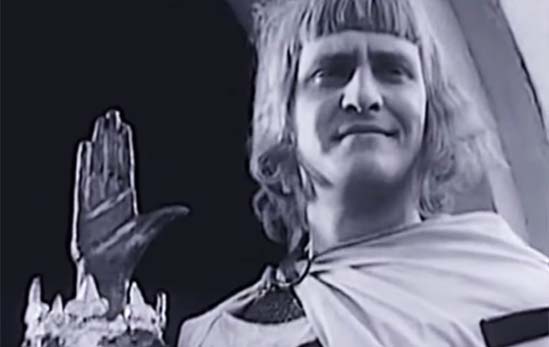 The imagery of Alexander Nevsky draws many parallels between the invading Teutons and the Nazi party.

Alexander Nevsky, Sergei Eisenstein’s seminal propagandist epic about the titular character’s historic victory over the invading Teutonic Knights, opened to the general public on 1 December 1938. It was widely praised by government officials and members of the film industry for its assertive anti-German subject matter, winning Eisenstein the State Stalin Prize in 1941. The film, however, was 10 minutes shorter than intended. One section, wherein two warriors meet on Novgorod Bridge, was unintentionally omitted from the final cut. The reel of film that contained this scene was accidentally left out for editing when the finished picture was delivered to Stalin for his personal viewing. According to David Bordwell, Eisenstein had been napping when an assistant collected the reels for transport. No one wanted to admit to Stalin that they had forgotten to show him the missing reel, choosing instead to merely accept the unmotivated gaps in the plot, something which mercifully went unnoticed by the leader.

Such tensions typified the relationship between the state and the film industry under Stalin. Moreover, Eisenstein was well aware that often certain compromises to his artistic integrity had to be made in order to continue creating -and to continue to survive- in the Stalinist artistic sphere. Yet, while such concessions of integrity are evident in Alexander Nevsky, his unfinished Bezhin Meadow project and Ivan the Terrible Part II show the extent of Eisenstein’s unwillingness to compromise his artistic vision. Paired with his debatably controversial lifestyle, this made his survival of political and artistic purges particularly anomalistic. As an intellectual Jewish artist who was accused of homosexuality and whose apparent bourgeois tendencies were displayed through his purported affinity for Formalism, Eisenstein outlived many other members of the art world whose personalities and works were not so abrasive to Stalinist ideology. This is partially due to Eisenstein’s competence as a director which, for the Soviet government, equated to competence as a propagandist.

While all of Eisenstein’s films were influenced by the Soviet government in one way or another -by either being directly commissioned by the government or having scripts assessed by government officials- his earlier films show a more blatant support towards the Soviet ideological cause. Battleship Potemkin and October both glorified the concept of revolution, as well as contributing to the mythologisation of the 1917 Revolution that permeated art and propaganda in the early days of the Soviet Union. These films also demonstrated Eisenstein’s pioneering montage theory, which eschewed usual editing techniques by distorting the perception of time in order to maximise the impact of a particular scene. Though groundbreaking, when Eisenstein returned from his travels to the US and Mexico in late 1930, he found these techniques were now the subject of staunch criticism. Their ‘unrealistic’ portrayal of events was equated with bourgeois intellectualism that was not palatable to the uneducated masses. This label of Formalism tainted Eisenstein’s reputation in a dangerous way, as the political purges of the mid 1930s prompted the 1936 anti-Formalism campaign which gripped artistic community in terror.

Eisenstein consequently found himself in a difficult situation. The new Soviet directive for the arts was announced to be Socialist Realism, an initially loosely defined ideology which purported the forthright appraisal of communist values. B ezhin Meadow was subsequently criticised for its inconsistency with Socialist Realism by Boris Shumyatsky, the then-head of the Soviet film industry. Thus, as an act of desperation in the face of possibly life-threatening criticism, Alexander Nevsky was created to conform with this ideology. It was during Alexander Nevsky’s inception in the mid-to late 1930s that Stalinist historiography and propaganda began to shift focus towards the recognition of individual characters of history, primarily as a means of endorsing Stalin through historical allegory. Thus, Eisenstein’s final two projects, N evsky and Ivan the Terrible, both focus on this idea of hagiography. I van the Terrible, however, portrayed a rather bold indifference towards this idea as Eisenstein chose to pursue his desires of artistic experimentation.

Such moments of controversy with the government therefore, stem from Eisenstein’s unwillingness to stick to the Socialist realist directives of Soviet Propaganda. His experiments were seen as counterproductive to the main aim of cinema which, according to a Pravda editorial from 1942, asserted that ‘every frame in a film...should fire a well-aimed shot at the enemy.’ While he certainly stretched the boundaries through his experimentation, this did not define him as a blatant dissenter as he was nonetheless still a willing propagandist for the Soviet regime. Yet his loyalty towards communism has understandably come under question among historians and biographers. It was obvious to Eisenstein that if he wished to pursue his artistic endeavours in cinema, he would have to do so within the defined propaganda framework that the Bolsheviks had established. Whether this meant he was merely a communist for the purposes of staying alive, however, is doubtful. Nevertheless, it is likely his commitment to the regime would have certainly wavered in his final years, causing him to pursue his vision for Ivan the Terrible with less caution, having as Neuberger asserts, witnessed the USSR’s ‘descent into authoritarianism and terror... in sickening close-up’. This was not, however, something Eisenstein would have stated directly, aware of the fine line he had to tread in order to maintain his ability to create and not meet the same fate which befell many of his contemporaries.