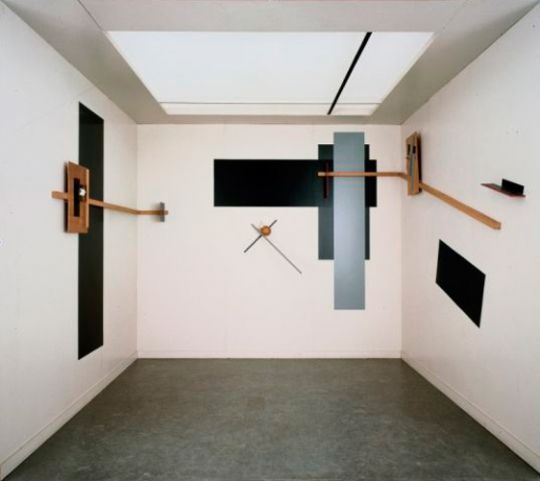 This will be the story of three rooms in two extraordinary exhibitions, which collectively reveal, each in a highly suggestive setting, the paradoxes of the Soviet utopian goal. These rooms, El Lissitsky’s Proun Room (1923), reconstructed in 1971, and Ilya Kabakov’s installation The Man who Flew into Space from his Apartment (1985), both shown in Eindhoven, and the room of the eponymous Happiest Man, (2000, recreated 2012) installed in London, represent the before, during and after of the socialist dream.

In the spacious modern extension of the Vanabbemuseum we are led on an (ironically) red carpet through rooms in which the idealised spaces and constructions of Lissitsky are interposed with objects and spaces, often of a deliberately bathetic kind, made and curated by the Kabakovs. Lissitsky’s Prouns (a neologism meaning ‘Project for Asserting the New’), boldly suggest objects in flight with their geometrical spatial arrays. In the Proun Room, developed from a lithograph and realised at the Vanabbe, the Prouns and we ourselves are both grounded, enclosed, forced to consider both the ethereal ideal and the architectural reality of Lissitsky’s dream factory. John Milner explains: ‘The floating space of the picture, once anchored in the perspective system of the architectural drawing, can then be constructed. El Lissitsky made painting, design and architecture into one continuous spectrum of activity’ (John Milner Design: El Lissitsky, Antique Collectors’ Club, Woodbridge, 2009). This activity, moreover, was dedicated single-mindedly to the elaboration and promotion of the coming Soviet utopia.