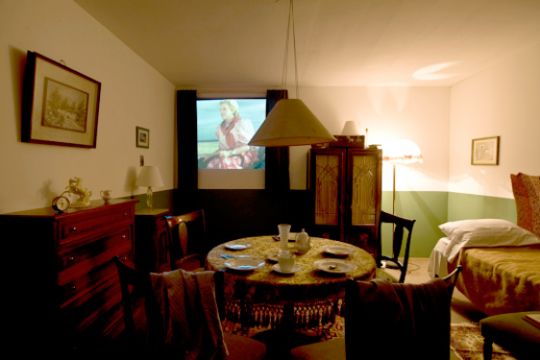 
In London we confront dream and reality in a single, vast and depressing setting, the gloomy basement that is the University of Westminster’s P3 exhibition space. A single room, poorly furnished yet homely, huddles within a theatre auditorium. Through the window we view, as if in reality, propaganda films of alternately brisk and sentimental images from the farm, the music hall and the river boat. We are quickly embraced by these visions of progress and prosperity, we become the happiest man. Leaving the room we see the images for what they are, projected on a distant screen beyond the rows of empty seats, a celluloid Utopia, unreachable in practice.

Back in Eindhoven the red carpet leads us to Ilya Kabakov’s defining installation, a small room plastered with propaganda posters into which we can peer, through a broken wall, just like the astonished neighbours in one of the associated drawings. A contraption of springs and cords hangs beneath the jagged hole in the ceiling through which the hero of the narrative, in private emulation of Yuri Gagarin and the cosmonauts of the Soviet space programme (and there is perhaps also a reference here to the Christian Ascension), has propelled himself beyond the confines of reality into a new and perhaps brighter personal Utopia. Is he dead or alive? We do not know and we may guess that the artist does not know either. Now an immigrant himself, there is surely a degree of personal identification here between artist and narrative. The jaundiced yet nostalgic review of Soviet reality in the Kabakovs’ works shown here, the details of collective living as well as the magnificent but unrealised public projects, seems to be the view of artists who have rejected reality for a new Utopia in North America, but cannot quite let go of the socialist dream. Boris Groys writes of Ilya Kabakov’s ‘enlightened, sceptical attitude’, an artist for whom art is ‘about the chance to change existing circumstances or at least to escape them.’ To exchange one Utopia for another in fact.