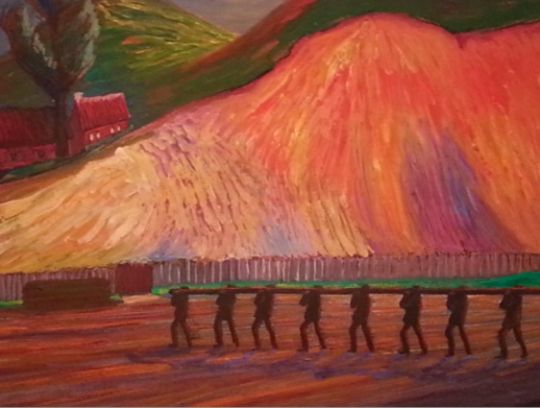 Marianne von Werefkin (Verevkin in Russian) was born in Tula near Moscow but spent much of her life in Western Europe, first in Munich as the partner of Alexei Jawlensky and then in Switzerland. The Werefkin Foundation in Ascona, where Werefkin lived later in life, holds about 70 of her paintings and 160 of her sketchbooks.

While her expressionist use of colour may derive from the Western influences of Van Gogh and Gauguin, her themes are northern, reflecting a harsher geographical and psychological reality, closer to that of Edvard Munch, and in content, though not in style, the social concerns of the Russian peredvizhniki. Her teacher Ilya Repin’s Barge Haulers on the Volga (1870-73) has some of the desperation and pathos of hard labour that we find also in Werefkin’s The Mine. Werefkin’s family estates were in Lithuania, from where she wrote to Jawlensy, then in Munich, in 1910: ‘All that is here is suffering and this horror of beauty and this horrible life and this overbearing literature, and the complete superfluousness of art.’

Yet Werefkin made art from the very material that so appalled her, deploying the expressive colour combinations used by Jawlensky and other members of Munich’s Blaue Reiter group, of which she was an early member. Against these infernal colours stumble the silhouettes of her burdened, faceless workers – ‘Some black figures – and the heart is heavy’ she wrote to Jawlensky. In her mature pictures black is the counterpoint – in figures, trees, mountains – to the flaming reds and lurid violets of her landscapes. Displacement and personal alienation – the lot of the emigree artist – and the challenge for a woman artist in a largely male community, find their way into her highly individual visual world. Her women have presence and assert themselves in her pictures whereas her men, as in The Mine, are often reduced to ciphers showing some kinship with L. S. Lowry.

Nihilism and regret are nevertheless turned by her painterly alchemy into a solemn beauty, far removed from the realism of Repin, with roots instead in the symbolism of Baudelaire and Poe, and the dark visions of Mikhail Vrubel. An authentically Russian vision is to be found on the bright shores of Lake Maggiore.