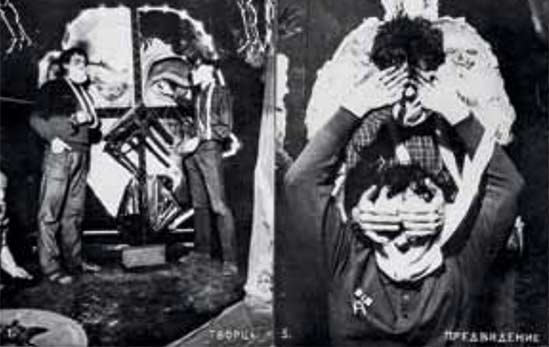 At the end of a remarkable exchange that spans consideration of politics, generational differences among artists, and the metaphysics of pictorial space, the artist Andrei Monastyrski and the critic Joseph Backstein circle back to an event they designate as a beginning for Moscow Conceptualism—the crucial “first” steps that extended the concerns of painting to installation. In their 1988 dialogue “Inside the Picture,” both argue that the early oeuvres of Vitaly Komar and Alexander Melamid, Ilya Kabakov, and Irina Nakhova trace a historically coherent arc of shared interests in the impact of the image on the viewer as painting is transformed into a complex spatial- temporal form. Having identified generational differences among this Moscow cohort, they consider the significance of the first installation staged in 1972–73 by Komar and Melamid, Paradise/Pantheon. This essay outlines the points of contact and difference among those artists—following the lead provided in that 1988 dialogue. But it also pursues further the implications of viewer engagement for each.

Crucially, Paradise/Pantheon was both performance and installation—even though originally it had been conceived only as an installation. The event, described as Paradise (Action)(Deistvo-Rai) was informed by Komar and Melamid’s somewhat limited exposure to the spectrum of art involving non-art activities gleaned from art journals and occasional visitors from the United States and Europe. Mainly, however, the work drew on their professional experience as designers in a Pioneer (youth) theater and the sensory environment of the empty prop room and the stage awaiting its actors. As both performance and environment, Paradise/Pantheon realized the ironic connection between a theatrical space repurposed for political statements and the hyperbolic (though hollow) rhetoric of its forms.

The performative aspect of the work (Deistvo) was literally accidental, prompted by Melamid’s breaking his arm, having fallen off a stool while creating the installation—an event foreseen in a dream by his collaborator, Komar. Paradise (Action) restaged the accident itself as a merging of blasphemous religious and political ritual, from premonition to fall. The artists— self-designated “Creators”—consumed relics (chicken wings), marked participants with stigmata (the contours of a stool), and drank shots of vodka. Chronologically the first Moscow performance-based installation, the event integrated two distinct generations of artists who would come to define the shifting priorities within conceptual art in Moscow. Komar and Melamid were joined by the artist Ekaterina Arnol’d (Melamid’s wife) and members of the soon to be formed Nest Group: Gennadii Donskoi, Mikhail Roshal’, and Victor Skersis.

Shortly thereafter, the artists invited individuals, a few of whom were prominent figures in the dissident community, together with artist friends, to experience the transformed space alone. This small group of viewers included Monastyrski and Backstein (the latter already knew Komar and Melamid’s work from their one-day Bluebird Café exhibition in 1967). Their retrospective account of viewing Paradise links the chaotic, sensory, and eclectic language of the interior with the concepts of pictorial and metaphysical space discussed in the dialogue “Inside the Picture” and in Monastyrski’s text on MANI.

Both observe that Komar and Melamid, by engaging audiences in an experience of the installation, were the first to create a “viewer- character” focused on the ideological field. The artists’ next step crucially established the “artist-character,” but one who, unlike Kabakov’s fictional Short Man from Ten Characters, is actually a parafictional figure.