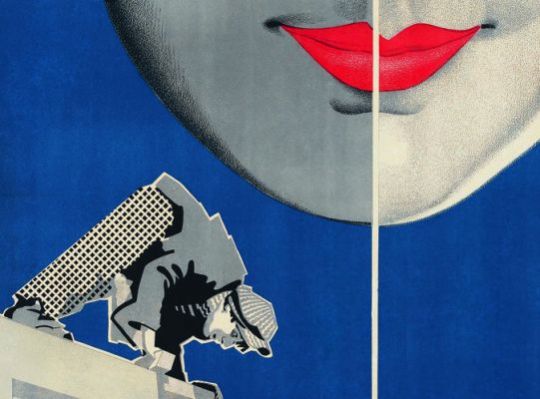 What struck me when confronted by the posters in KINO/FILM: SOVIET POSTERS OF THE SILENT SCREEN was the startling directness of their impact. Competing for attention amongst the flood of political propaganda posters and banners following the Russian Revolution meant that artists sought to ‘employ everything that could stop even a hurrying passerby in his tracks’. The Stenberg Brothers and their colleagues employed dynamic angular compositions using radically distorted perspective, unusual angles and bold, arresting colours.

What I find astonishing is that artists were often given less than 24 hours to design these posters, the results of which combined manual image making skills with mechanical processes. Posters were produced in large numbers using machine-run offset printing processes that had arrived in Soviet Russia in the late 1920s [1]. The urgency with which artists were forced to work contributed to the spontaneity and visual immediacy of the outcome.

London Pint Studio, in collaboration with GRAD, hosted a fantastic lithography demonstration that enabled us to grasp the complicated processes of lithographic printing and appreciate the incredible virtuosity of artists in successfully expressing the character and atmosphere specific to individual films.

[1] The off-set process uses a series of rollers; the image (the right way round) is transferred on to another roller (in reverse) which then transfers the image on to the paper the correct way round. This considerably speeds up the process for commercial production.


THE PRINCIPLES OF LITHOGRAPHY

Lithography is a planographic, or surface, printing process invented in the late nineteenth century. The term comes fr om the Greek lithos (stone) and graphein (to write). It relies on the chemical fact that grease and water repel each other.

SIMPLIFICATION AND TRANSFER OF THE DESIGN

The lithographic stone used is an especially fine and porous type of limestone which comes from one particular quarry in Bavaria. In preparation for the transfer of the design the stone is polished with varying grades of carborundum grit until smooth. The design is transferred using red oxide transfer paper, which is chemically neutral.

[2] In Soviet film posters photographic images received from the Film studio would have first been squared up and then projected onto a layout board fixed to the wall. Artists could alter the size of an image by varying the distance of the projector and distort perspective by changing its angle, therefore suggesting the dynamics of film experience. Once complete, the image layout was passed onto the printers to be interpreted by craftsmen who would then transfer the image on to the stone.Testing our mark-making on a carefully prepared stone The image is then drawn directly on to the stone with a greasy litho crayon. These come in five grades (five being the hardest, containing the least amount of grease) and alter the density of the line created. Tone is achieved through varied mark making. What you see on the stone is how it will look. The lithographic process is all about chemical modification; dilute Nitric acid is added to fix the image on the (alkali) stone, and rubbed with gum arabic to prevent any further grease settling. The stone is then washed, ready for the inking process.

Because the process relies on the mutual repulsion of grease and water, the porous stone must be kept damp prior to inking. Water is sponged on to the surface. Greasy printing ink with the consistency of stiff black treacle is applied to the leather roller and then onto the damp surface of the stone. Wh ere water is present, the ink is repelled; wh ere the stone is etched and greasy marks remain, the ink will be attracted. Busy Inking up the leather knapp roller; Kath from LPS expertly inking the stone; the first of many!

This inking process is repeated three times, with the stone kept damp throughout. If the plate is not kept damp enough, the ink sticks to unwanted areas of the stone (right) Paper being carefully placed on the stone ready for printing; T bar marks, made on both stone and paper, are lined up to ensure exact registration.

The ink is transferred on to the paper by rolling the stone and paper together through the scraper press. The paper has been pre-printed area of flat colour using a photo-lithographic method. Henry Milner pushing down the handle to increase the pressure; the stone is then rolled through, by Rosie Rockel at a steady speed. The moment of truth: Paper peeled back to reveal the lithographic print! 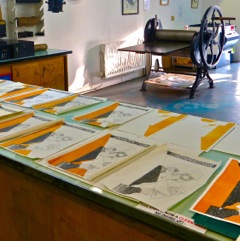 Thanks to the London Print Studio; a very successful workshop!