Ali Winstanley is a London-based collector and cultural explorer. Her website, Kuriosas, is a glorious medley of vintage books, odd artefacts and delightful curios she has found on her travels around the former Soviet republics. She describes it as 'a portal for cherishing, celebrating and archiving obscure artefacts, vintage graphics, people and places'.

We caught with her to find out what piqued her interest in Soviet design and wheedle out some tips on where she finds such illusive Soviet gems.

What is your connection to Russia and Eastern Europe ?

I became interested in Eastern Europe in around 2007. I heard about an artist colony called Uzupis in Vilnius, Lithuania along with; the Frank Zappa statue in the city and just thought it sounded intriguing. I conducted a trip there and Riga in Latvia that summer, and was overwhelmed by how eclectic things were visually, and how everything seemed quite jarring. I found the contrast of the past to the present really startling, but fascinating.; As a photographer, I loved discovering old Soviet murals and disused buildings that looked like spaceships, as well as being introduced to local folk art by people I met in rural villages. There seemed to be so many layers of history laid out to explore and digest.  I've always liked to travel off the beaten track to more obscure places and decided I really wanted to explore the region further as it just seemed more exciting, stimulating, surprising and unpredictable compared to the familiar polish of Western Europe. In 2008, I lived in Berlin for 6 months.  A friend there was half Ukranian and enjoyed showing me sights like the Russian monument in Treptower Park. We would enjoy driving around some of these epic areas of East Berlin at night, with tower block after tower block stretching for miles, many with amazing names from the past such as 'Allee de Kosmonauten' ('Street of the Cosmonauts').  I lived in the former East just a few houses down from where the wall stood. It was this stark daily confrontation with history that naturally made me want to travel further around Eastern Europe and learn as much as I could about the past. Berlin was also a great base to explore from - I forced some understanding friends out there to go on regular bumpy road trips to Poland and the Czech republic (one time to see the magnificent Hotel Jested - the ultimate space age building!) where I built up more of my collection. Although I've made it to the Ukraine, the Baltic states and most of the former Eastern Bloc, I've yet to actually get to Russia! I'm hoping to go to St Petersburg in 2015, though. I've long been drawn to Russian art and literature - I love the work of the Constructivists and Suprematists, as well as film makers like Tarkovsky and writers like Chekhov so it will be great to finally experience the country first hand.

The empty buildings I stumbled upon on my first trips to the region really piqued my interest in Soviet design in general - disused, yet still magnificent otherworldly visions of concrete that looked like they'd landed from a different planet.  As I discovered more of the region, I also found graphic design and illustration from the Soviet era hugely exciting as they so clearly had their own aesthetic trajectory, which made for such arresting and intriguing images. I also liked the fact you could spot recurrent themes and motifs that have all sorts of deeper connections to what was going on - a lot of things I find feature space age imagery as well as quite fantastical images of people slaying dragons, for example. The messages are usually of dominance and strength, victory and omnipresence.  In the face of the often generic and repetitive design I was used to in Western Europe, I found it hugely refreshing to find artefacts that - to me - felt truly different. How did you start collecting Soviet ephemera? What's the first piece you bought?

During my trip to Lithuania I found lots of postcards of Soviet buildings as well as pictures of really deranged puppets. After that, I knew I wanted to see more of the region and find what other unusual and comical things were out there. It became a bit of an obsession.  That said, I run vintage fairs in London and trade my own wares so have sold on some things I've found - any dealer will tell  you it can be hard to hang on to items, although there are a few finds I regret letting go of already! I always make sure I keep the really special discoveries though, the ones I know I really won't find again. Describe your collection, what sort of objects is it made up of and where do they come from?

Most of my collection centres around book covers and postcards, although I do have some badges and toys I've picked up, and would love more of this sort of thing.  Books are so cheap in Eastern Europe and yet feature really original cover designs that make them artworks in themselves.  My collection is mostly from flea markets in Lithuania, Ukraine and Estonia, as well as former Eastern Bloc countries such as Poland, Romania, Hungary and Czech Republic. What's your favourite object in your collection?

Probably some of the book covers I've found, at once dazzling, psychedelic and a wee bit disturbing! I've always responded strongly to anything bordering on the surreal and their thoroughly imaginative and strange covers excite me. I like to display them around my house just to unnerve myself on a regular basis. I also picked up some beautiful 1970's Soviet metal pin-badges in Estonia with all sorts of colours, abstract patterns and things like wizards on them - I'm trying to find an effective way to display them so I can look at them all the time! Where do you go to find these items?

Local flea markets or junk shops. I usually try and learn the word for market and speak to locals to find out if there is one nearby, or search online where I can.  Often you can just happen upon these places down backstreets if you're lucky! Do any of the objects have interesting or bizarre stories behind them?

In a roundabout way, collecting and nurturing an interest in book covers and illustration from Eastern Europe led me to a very inspiring and memorable meeting.  Through some of my research, I'd come across amazing Estonian illustrator and artist Jüri Arrak, who created super illustrated creatures in his 1970s children's book 'The Swamp Ladies of Estonia.' I loved his work and had talked about him with Will from 50 Watts, a US-based book blog.  When I visited Tallinn Will suggested I should look out for his work, which gave me the idea to actually hunt him down and see if he was still alive. Amazingly, the tourist office gave me his direct phone number and he invited me to his studio that afternoon! I photographed and interviewed him for my blog, Kuriosas, and had an an extraordinary eye-opening time in his cornucopia of a studio in a Soviet apartment block. We viewed his original artworks and collected artefacts, he read to me from a copy of his 1970s book and told me some enlightening stories of his experiences as an artist in the Soviet era.  At 77, he still worked in his studio daily and had no plans to stop; I found his attitude towards life and creativity hugely inspiring.

As Soviet memorabilia has become more popular, have you found harder to hunt down particular rarities and have people's attitudes towards them changed in the places you visit?

I think people are certainly more aware that some of these artefacts, toys, posters and so on might have value to foreigners and charge accordingly for them. I find that books can still be found very cheaply as they aren't necessarily seen as having real worth unless they are a first edition. The fantastic cover designs from that era mean you can grab a unique relic of Soviet design very affordably! What are your top tips for someone hoping to find some Soviet gems in Eastern European and Russian markets?

It always helps to learn a bit of the local language: hello, thank you and a few numbers so you can haggle! People always seem to appreciate that (especially with the trickier Eastern European languages!) and it might get you a bit of money knocked off for your efforts! Generally, though, be prepared to pay more than the locals! 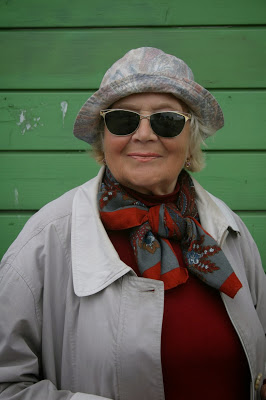 At a book market in Ukraine I found some wonderful postcards I was told were the equivalent of 50p each.  I was happy to pay this as they were so unique, although I was aware I was probably paying over the odds. Later on, a local book seller befriended us and offered to walk us around the market to translate. When we approached the same stall, he asked the price of the postcards. With him present, they were reduced to 4p each! So perhaps the top tip would be to take a local guide whenever possible!  Perseverence is also key - you don't know what might be at the bottom of that box or suitcase, take time to rummage and see what you might find!