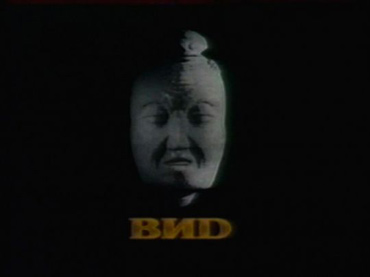 Late 80s Russia was no longer your stereotypical Soviet ‘Other’ lurking behind the Iron Curtain. The end approached:  the end of comradeship, of childhoods in the Pioneers, of full employment. The end of a predictable socialist utopian future, only to be replaced by what seemed unthinkable madness: a great torrent of new music, literature, media and culture, bringing with it new 'perestroika' or 'glasnost' people. The merciless rebuilding of everything that was so heartily cherished for decades has produced people like myself with a 'born in the USSR' stamp in their passports, but a totally different future. Let’s look some of the bizarre 80s popular media and culture stunts to get a sense of Russian popular culture's taste for the apocalypse in the last days of the Soviet Union.

As a child I remember this eerie and culturally totally inexplicable white mask, the symbol of 80s TV production company VID.  It would appear suddenly in between programmes with an equally disturbing musical accompaniment. The disembodied frowning face, crowned by what appears to be a toad on its bald skull, haunted my worst nightmares. Looking back, it is in fact an appropriate symbol of the total loss of control and censorship that gave way to the then-inconceivable cultural references and experimentations at the time.

The original sculpture featured in the VID logotype: a ceramic mask of the ancient Chinese philosopher Guo Xiang

Another gem was a 1991 TV spoof by the notorious Sergei Kuryokhin. His claim that 'Lenin was in fact a mushroom' was a bizarre revelation to many.  Armed with some very convincing diagrams, philosophical backing and Kuryokhin’s own handsomely intellectual face, the video quickly caught on, becoming the first media storm in the USSR. The episode, broadcast live on The Fifth Wheel television programme, successfully gave the illusion of a considered intellectual discussion, during which Kuryokhin and journalist Sergei Sholokhov purported to expose the mysteries of the Russian Revolution. Using numerous literary, philosophical and ethnographic references Kuryokhin argued, really quite persuasively, that Lenin predicted the Revolution through the avid consumption of hallucinogenic mushrooms, which slowly came to replace his personality. Still from the infamous 'Lenin is a Mushroom' spoof, broadcast in 1991

Growing up then, you just didn't know what to believe anymore. Kuryokhin’s main activities were based on musical experimentation - I can’t help wishing I was old enough to appreciate the genius and madness of his impromptu New Age shows, known as 'Pop Mechanics'. His 1984 project involved a continuously changing cast and featured some the most iconic musicians of the time: Kino, AuktsYon, Akvarium, Avia, amongst others. 'Pop Mechanics' was a new theatrical genre, a formula for stage performance without limits. Avant-garde jazz and experimental performance art were wrapped up in an extraordinary phenomenological show. Anything could happen on stage with celebrity rock musicians, artists, clowns and animals involved.  Imagine a stern Soviet military choir being constantly interrupted by a recklessly bleating goat. As much as Kuryokhin warned his participants of the improvisatory nature of his shows, it didn’t seem to stop him from getting in trouble afterwards. This was of course 'unofficial' culture, but was well known for its daring musical and visual provocation.

Crowning the 80s Soviet broadcasting extravaganza were the mass televised séances with faith healer Allan Chumak. The sports commentator-turned-healer psychically “charged” water and was so convincing that people were even rumoured to charge water remotely via a television screen.  Another prominent TV persona of the 80s, Anatoliy Kashpirovskiy, could boast an even more enviable skill - anaesthetising patients undergoing surgical operations - all on live TV.

At this point the normalities of an ordered Soviet life remained in place, but the instances described above capture a brief and final stage in Soviet popular culture. The demise of almost a century of cultural censorship opened up a treasure box of bizarre and unimagined media provocations of which the above are just a few vivid examples. In the 80s the suppressed Soviet taste for satire was unleashed at last, hinting at things that had long remained unsaid.