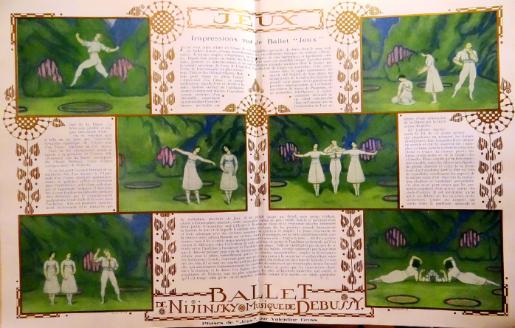 Jeux premiered on 15 May 1913 at the Théâtre des Champs Élysées. With a score by Claude Debussy, designs by Leon Bakst and danced by Ballet Russes stars Vaslav Nijinsky and Tamara Karsavina, along with Ludmila Schollar, Jeux opened the Diaghilev Ballet's fifth season in Paris to great anticipation.


The ballet was not well received by the expectant Paris audience. Those who were not outraged by the suggestive ménage à troi scenario, were merely puzzled by the odd set up of three young people in a park at twilight, dressed for tennis but merely engaging in a playful flirtation rather than a game of sport. Although it is the least documented of Nijinsky's choreographed works, a number of illuminating materials survive. These include various studio photographs, six pastels by Valentine Gross, a selection of Bakst's costumes, (although not all were used in the performance), both Debussy's and Nijinsky's marked scores, along with a bar by bar description of the action, critical reviews and reminiscence from performers and their contemporaries. This has helped dance historians piece together the lost work and reassess its significance. Originally considered of minor importance, Jeux in fact demonstrates innovation in every aspect of the 'poème dansé'. From the theme and scenario, to the aesthetic values, to the development of the relationship between movement and music, Jeux was an extraordinarily modern ballet. Unlike Nijinsky's more famous works, which aimed to reproduce artworks from Classical Greece or rituals from Russia's pagan past, Jeux was focused on uniting ideas and styles of contemporary art with dance. Although the origins of the ballet are claimed by three differing accounts, all agree on the desire to create a portrait of a modern man. Nijinsky and his collaborators attributed their inspiration to the Cubists and Futurists. Balletic movements were fragmented into short snap-shot like sections, giving the impression of a a series of photographic frames. These angular movements, branded by the audience as ugly were deemed too radical and far removed from traditional ballet technique.

However, the sport theme was not a new creation. Pictures dating as far back as 1716 published in Gregorio Lambrazini's New and Curios School of Theatrical Dancing depict a danced tennis match and Luigi Manzotti glorified a variety of sporting activities in his 1897 epic ballet production for La Scala. For Nijinsky the tennis game provided not an opportunity to celebrate dancers' athleticism, but a pretext to explore both the physicality and psychology of contemporary man.

As the fashionable sport of the times, the tennis theme gave possibility to Nijinksy's idea that a man's body is defined by his era. Combined with the Cubist influence, the fragmented gestures of the dancers were to reveal new possibilities for bodily movement. The 'game' played amongst the trio of dancers illustrated a critique on modern love. The three way flirtation over the search for a lost tennis ball was merely a game, but it was also a sensitive portrait of intimate feelings presented to the audience in an immediate setting. While the exploration of sexuality, passion, jealousy and reconciliation was not new to the Parisian balletomanes, they were not accustomed to experiencing it so directly. So why did audiences find it so underwhelming? Probably because the Parisians had come to expect new ideas contained within the settings of the exotic East, classical myths or romantic fairy tales. Perhaps they expected a danced game in which the virtuosity of the Russian ballet would be displayed? But the Ballets Russes were not famed for performing the expected.

As both a dancer and choreographer Nijinsky sought to cover new ground, continually attempting to discover new possibilities of the human body, each time revealing something unexpected to the delight or shock of the audience. After all, Diaghilev always keen to assert the prescience of his productions declared "We will date Jeux 1930!" What distinguished Jeux within the Ballets Russes oeuvre is in its modern setting Nijinsky attempted not to break with ballet tradition, but to evolve it so that the meaning of dance would be clarified and corporal movement would speak directly. It is just unfortunate that the audience of 1913 were unable to understand.