Pioneers of textile design with a common Russian heritage, Sonia Delaunay and Liubov Popova created a whole new vocabulary of geometric patterns. Paris and Moscow in the 1920s may seem like two different worlds, but the two artists did share similar concerns. 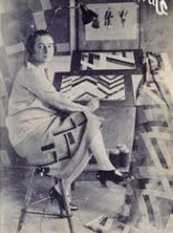 (From left) Sonia Delaunay in her Paris studio, 1923. Liubov Popova in her Moscow studio, 1919

Keen to follow the Constructivist tenet of productive art, Popova answered an initiative for artists to join Moscow’s First State Textile Print Factory in 1923, together with Varvara Stepanova, designing fabric patterns for mass production. Delaunay began producing designs for commercial purposes after the October Revolution deprived her of the income from family properties in Russia. A quilt for her son’s crib had been her first foray into the applied arts in 1911, and in 1918 she opened her first business, the boutique Casa Sonia in Madrid, where she was waiting out the First World War, and on her return to Paris she started Maison Delaunay in 1925. Although committed to the goals of Constructivism, Popova was also aware of the importance of the market, the demands of consumers and the dictates of fashion. In fact, it appears that with Stepanova, she produced fashion shows in which models wore clothes made from their fabric designs. Probably because of these promotional activities, despite tensions between the designers and the factory, Costructivist fabrics had some degree of success and as one contemporary noted: ‘this past spring all Moscow was wearing fabric with designs by Popova without knowing it’. Delaunay’s designs did circulate amongst the rich and famous, including celebrities such as Gloria Swanson and Nancy Cunnard, yet she was also interested in making her designs accessible to the general public. She patented her invention of the tissu-patron, a sort of DIY dress kit that contained fabric printed with a dress-making pattern that matched its decorative design. In a lecture she gave at the Sorbonne in 1927, Delaunay specifically spoke about how this ‘fabric-pattern’ would ‘enable a dress to be precisely reproduced at the other end of the world at minimal cost and with minimum wastage of material’. Interestingly, Delaunay also publicised her invention in the Soviet Union in 1928 in the journal Iskusstvo Odevatsia.

Aligning the printed design with the structure of the dress was equally a concern for Popova. She wanted to become more involved in the production process, in order to control the design of the fabrics in relation to their intended use. Unfortunately, the factory management did not take kindly to this and, like Delaunay’s tissu-patron, this initiative remained within the domain of the theoretical. Popova’s attempts are visible in sketches matching fabric patterns with clothing designs that work efficiently together. However, despite this Productivist veneer, these examples and many other clothing designs by Popova are elegantly reminiscent of Parisian fashion.

Nonetheless the bold patterns that Popova designed certainly adhered to Constructivist principles and she was criticised by factory management for using a compass and ruler to create her designs. She scrupulously based them on Euclidian geometry and simple shapes, derived from her last experiments with easel painting. Popova also used repetitive forms and primary colours and sometimes introduced a sdvig, a dislocation of the rhythm of the pattern. Similar elements characterise Delaunay’s fabric patterns. She achieved notoriety due to her distinctive geometric designs in strong colours, adapted from her experiments with Simultaneous colour theory in painting. The notion of dislocation is also present in Delaunay’s designs, for example in the pattern reputed to be the artist’s favourites.

Sonia herself, in her lecture at the Sorbonne, spoke about geometric motifs as a practical choice that allowed her to research the theory of colour interaction though her garments, distancing herself from any suggestion of fashionable frivolity: ‘geometric patterns will never become old-fashioned, simply because they have never been fashionable’. Almost a century later, few could argue that the designs of Delaunay and Popova are not as fresh as the day they were created.