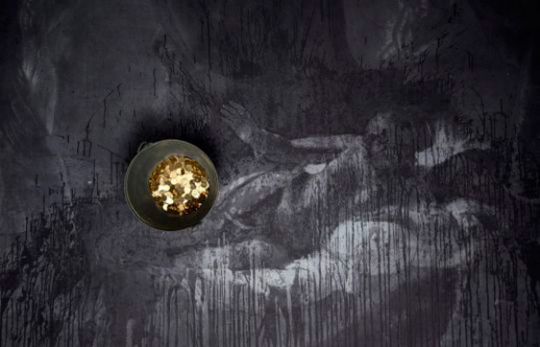 In the Russian pavilion money is power and it's in the wrong hands. Russian artist Vadim Zakharov reinterprets the Greek myth of Danaë, who falls pregnant by Zeus in the form of a shower of gold. Conception by pure cash: the ultimate prize for the gold-digging wife, or the banker’s twisted fantasy?

The first of the two rooms presents the very Russian sight of peanut shells littering the floor. Empty husks skitter across the marble, cast down by a saturnine city-slicker on a saddle polished as black as his boots. He sits nonchalantly astride a rafter, impervious to those below. On the wall beneath him the words: "Gentlemen, time has come to confess our Rudeness, Lust, Narcissism, Demagoguery, Falsehood, Banality, and Greed, Cynicism, Robbery, Speculation, Wastefulness, Gluttony, Seduction, Envy and Stupidity." For Zakharov, the word 'gentlemen' is not chauvinistic synecdoche for the public at large, but a pointed finger at men alone. His commission takes on the legend of Danaë, whose father shut her up in a bronze tower to prevent her falling pregnant after an oracle prophesised that he would be killed by his daughter's son. Undeterred, the randy Olympian Zeus came to her as a shower of golden rain and knocked her up anyway.

In depicting Danaë, Zakharov signs his name to a list that includes Coreggio, van Dyck, Rembrant, Klimt and, of course, the Venetian painter Titian, for Danaë is no stranger to Venice. Her legend so transfixed Titian that he returned to her again and again. Five of his paintings of her exist today, showing her either naked or clothed, flesh youthful or withered, but always longingly turning to Zeus’s shower of gold. Like Titian, Zakharov considers not only what money does to men, but also its seductive hold over women. In the second room, male visitors stand around a dark opening into which a stream of glinting medallions pours from the cupola. They strike the floor below like golden bullets, where female visitors are invited to collect them, filling a bucket which is then emptied onto a conveyor by another moody dark-suited oligarch and winched up to the ceiling to complete the cycle.

Of course Putin, oligarchs and money-fixated New Russians all come under fire in Zakharov's theatrical installation, but the real focus here is an older and more universal problem: the power imbalance of the sexes and the critical role of money in this inequality. Zakharov uses the pavilion's visitors as eager pawns who fulfil their roles in the allegory with unsettling obedience. Women shriek and giggle as they dash to gather up the coins, while men, silent and watchful, oversee their efforts with what feels like steely authority. Zakharov's installation at the Russian pavilion reveals our uneasiness around money, calling upon both the discomforting wealth of the new oligarchy and also the ancient, enduring fiscal imbalance of the sexes. It's rare to find an installation that succeeds at being both highly enjoyable and strangely troubling. The sharp clinks of metal hitting the ground ring in your ears long after you leave.